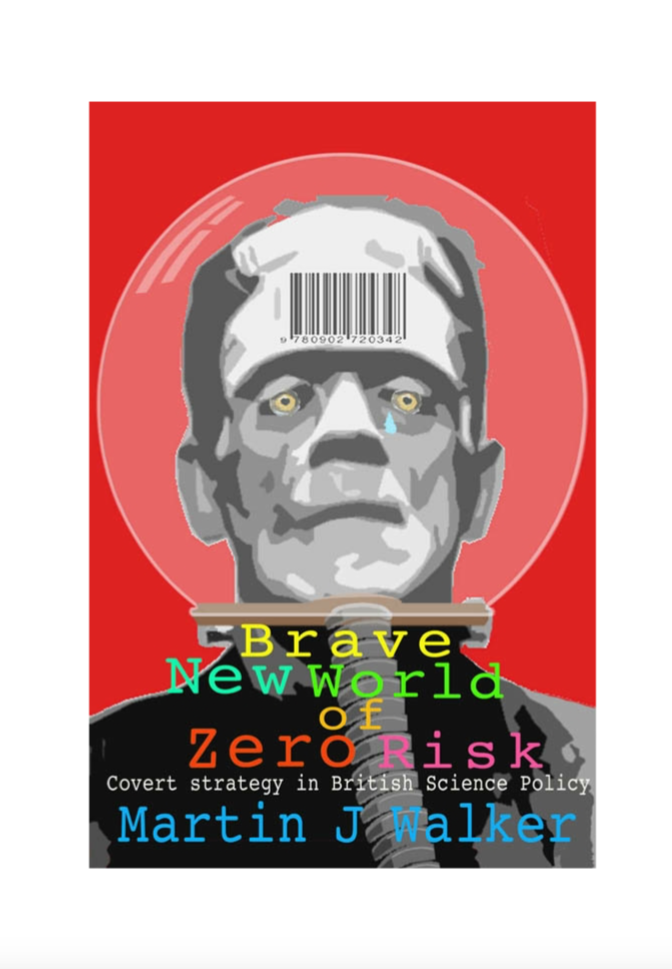 “THE NEED for the book that follows was made clear to me by two apparently unrelated conflicts in the area of health, which have been going on for some time now. Firstly, the battle that has been forced upon those who are asking for scientific research into the organic causes of Myalgic Encephalomyelitis (ME). Secondly the attacks on Dr Andrew Wakefield, who posed questions about the safety of the multiple measles, mumps and rubella vaccine (MMR) after research into Crohn’s disease and ulcerative colitis, which are the most familiar manifestations of a family of disorders called Inflammatory Bowel Disorders (IBD)…

I realise that a good part of the following text is a historical narrative and analysis. It often seems to me, however, that as critical social observers and activists we don’t learn enough from our history.”   -xxii 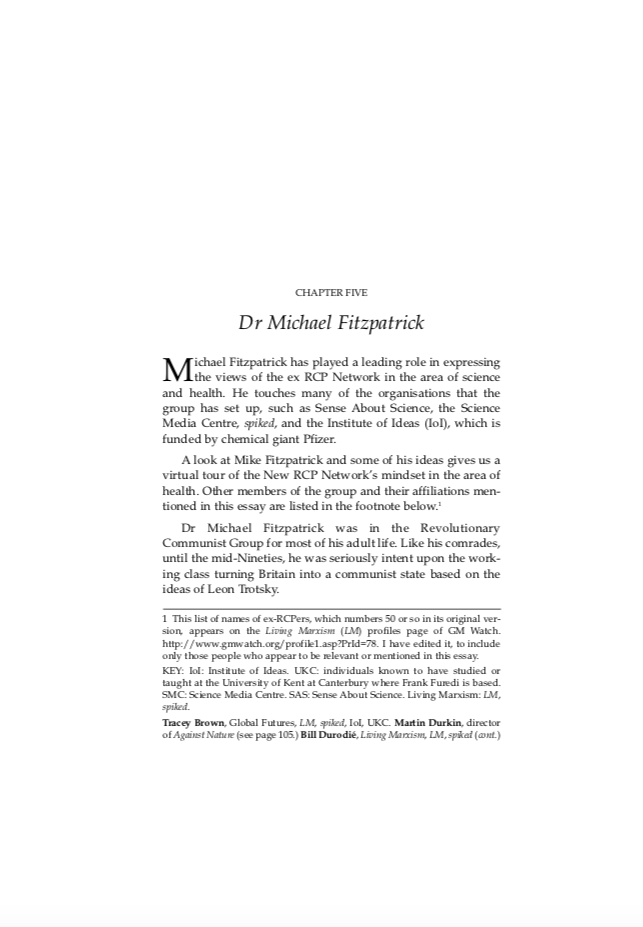 “Dr Michael Fitzpatrick was in the Revolutionary Communist Group for most of his adult life. Like his comrades, until the mid-Nineties, he was seriously intent upon the working class turning Britain into a communist state based on the ideas of Leon Trotsky.” Page 37 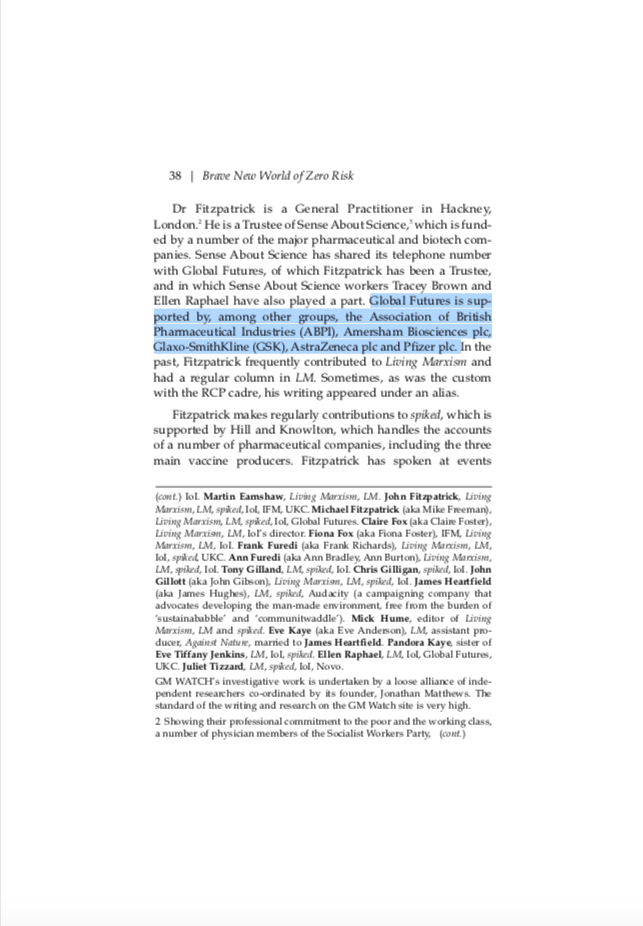 “Global Futures is supported by, among other groups, the Association of British Pharmaceutical Industries (ABPI), Amersham Biosciences plc, Glaxo-SmithKline (GSK), AstraZeneca plc and Pfizer plc. In the past, Fitzpatrick frequently contributed to Living Marxism and had a regular column in LM. Sometimes, as was the custom with the RCP cadre, his writing appeared under an alias.” Page 38 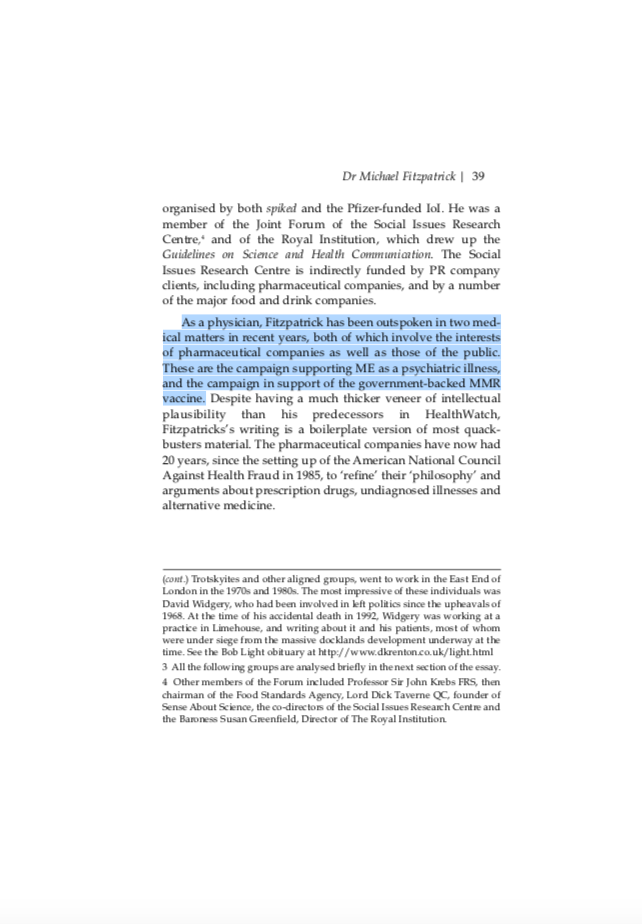 “As a physician, Fitzpatrick has been outspoken in two medical matters in recent years, both of which involve the interests of pharmaceutical companies as well as those of the public. These are the campaign supporting ME as a psychiatric illness, and the campaign in support of the government-backed MMR vaccine.” 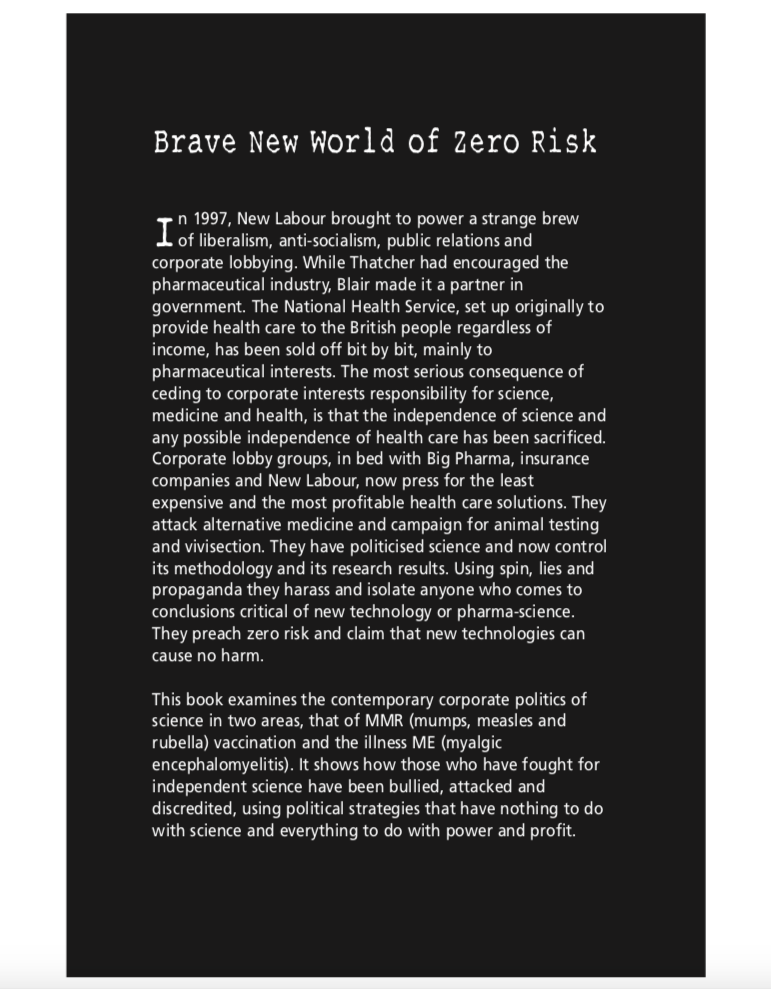 *December 2003 Guardian Article:“Invasion of the entryists – How did a cultish political network become the public face of the scientific establishment?”

“LM’s health writer, Dr Michael Fitzpatrick, is a trustee of both Global Futures and Sense About Science. SAS has set up a working party on peer review, which is chaired and hosted by the Royal Society.”

“For thousands of parents with vaccine-injured children, the 1986 National Childhood Vaccine Injury Act (NCVIA) conjures up sadness, betrayal of trust, disappointment and anger. But what does the rest of the public think? Most people don’t even realize the NCVIA exists! They are still under the rosy misconception that vaccines are safe and effective and that our legislators and public health officials would never do anything that would knowingly hurt America’s children.  We need to educate them. That is where 1986: The Act comes in.

Viewers will learn how “The Act” turned fairness and the US court system on its head. Touted at the time as a helpful, non-adversarial alternative to long, protracted court battles, it actually turned into anything but; where the vaccine- injured linger without help, parents rack up medical bills and wait years for monetary relief which seldom comes, and government lawyers take home fat paychecks for their efforts against families.  This corrupt system ensures that consumers pay the tab and vaccine manufacturers laugh all the way to the bank.”

Vaxxed: From Coverup to Catastrophe

“Interviews with pharmaceutical insiders, doctors, politicians, and parents of vaccine-injured children reveal an alarming deception that has contributed to the skyrocketing increase of autism and potentially the most catastrophic epidemic of our lifetime.”